The future of food: What you need to know about cell-based meat 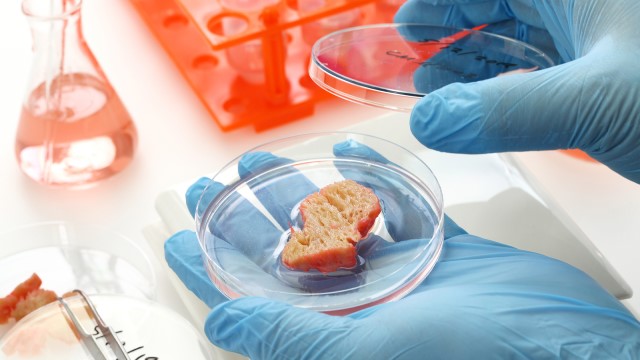 It’s clear plant-based meat is having a moment, but what about cell-based meat? Whilst there’s still no official name for meat grown from cells (AKA cultured meat, clean meat, synthetic meat, etc), you can be absolutely certain it will be on our plates very soon.

Before we can comprehend the extent to which cell-based meat will revolutionise the food industry, it’s important to understand what it is, plus any potential benefits it may have on our health, planet, and even our wallets.

Here are seven things you need to know about cell-based meat.

Is it really meat?

Yes. Instead of harvesting animals born in factory farms where they are subjected to harsh production systems, confinement and slaughter, cell-based meat harvests animal cells in a laboratory where they are grown in a serum of nutrients known as ‘culture’.

Whilst the specific processes may vary across cells types and proprietary cultivation methods, the end result in taste, appearance, and even on a molecular level, is meat.

Is it better for you?

If ”better for you’ means free of potential harmful bacteria, antibiotics, diseases or genetic modification, then Yes.

Unlike conventional meat which is typically raised in intensely overcrowded feedlots, cell-based meat is produced in a controlled sterile environment which therefore eliminates any risk of sickness associated with livestock farming including salmonella, E. coli, or animal-borne contamination such as mad cow disease, avian and swine flus.

Artificial growth hormones and antibiotics, often required to keep livestock healthy, is also unnecessary in the development of cell-based meat.

Is it better for the environment?

Cell-based meat is still an emerging industry, but early studies suggest that it is better for the environment.

Animal agriculture is one of the leading causes of global warming, deforestation, biodiversity loss, water usage and pollution. The United Nations has reported that animal agriculture is responsible for more greenhouse gases than all the world’s transportation systems combined.

Cell-based meat is created in a laboratory therefore requiring far less energy, less land and less greenhouse gas emissions. As for water use, cell-based meat pales in contrast to the estimated 3000 litres of water required to produce one hamburger, the equivalent of showering for two months.

Is there a market for it?

By some measures, yes. And it’s anticipated to grow.

Sanah Baig, chief of staff at the Good Food Institute (GFI) says: “The acceptance rate varies quite dramatically in accordance with the methodology used in each study, so it’s difficult to make country by country comparisons.”

The GFI is a non-profit organisation, with branches in Brazil, Europe, India, Israel and the Asia-Pacific, comprised of scientists, entrepreneurs, lawyers and policy experts working to accelerate the transition of the world’s food system to plant-based and cellular agriculture.

Whilst there are many studies of varying sample sizes and context, “the only cross-country comparison study conducted on this subject to date is GFI’s study of the US, India, and China, which found that acceptance rates were much higher in India and China than in the US,” says Baig.

As for Australia, George Peppou, founder and CEO of Australia’s only cell-based meat company VOW, says “there is some hypothetical data out there which shows a meaningful proportion of Australians are enthusiastic about cultured meat”.

According to Peppou, “acceptance is gradually increasing as there is more progress in the industry, more education provided to the public, and more influential figures getting behind the concept”.

Is it more expensive?

Yes. At least for the time being.

When something new hits the market, it’s typically tremendously expensive. It’s rumoured that Apple spent over US$150 million to develop the original iPhone, so it’s no surprise that the very first cell-based hamburger patty cost US$280,000 to produce in 2013. Today the costs for each is a fraction of that.

Whilst cell-based meat is still cost-prohibitive and far from achieving parity with conventional meat, it’s clear that production costs will continue to decrease as capacity increases and technology advances.

With backers such as Bill Gates and Richard Branson investing millions to bring cell-based meat to the market, it’s highly likely we will see cell-based meat produced at an industrial scale and achieve price parity with mainstream meat within two to three years.

No. Nor has it been approved by any country for consumption yet.

“While we have seen inroads from a regulatory standpoint, globally, governments have not taken much legislative action on cultivated meat,” says Baig of the GFI.

With so many companies at varying stages of production, and with numerous prototype varieties (beef, fish, chicken and more), it’s proving challenging for governments to remodel their laws for the acceptance of this new food sector.

“Australia is, to be blunt, behind the curve on cell-based meat,” says Peppou. “Singapore, the US, the EU, China and Israel’s governments are directly investing hundreds of millions in this space, formalising regulatory frameworks and, some of these markets, are assessing regulatory submissions from company to start commercial sale.”

Is it in Australia?

Yes. With more than US$150m invested in cellular agriculture since 2015, that figure more than doubled earlier this year when Memphis Meats secured US$161m in its Series B round. Whilst all these companies remain focused on developing cell-based beef, chicken, pork and seafood, in Australia we have VOW leading the sector which in their words, is developing “a house of brands offering many different products”.

Founded in April 2019, VOW has grown quickly to solidify its unique place having created the very first cell-based kangaroo meat.

According to founder and CEO George Peppou, “VOW is taking a different approach to many others around the world. We have set out to build an entirely new category of food, better than anything we consume from the five domesticated animals we eat today. We do this by creating a library of cells. These cells form the repertoire of new ingredients we can draw on to create limitless new types of food.”

It’s clear we’re in for a different future for meat. Whether cell-based meat will replace plant-based, or mainstream meat itself, remains to be seen but given its encouraging impact on our health, environment and animal welfare, coupled with growing acceptance and certain regulation, it’s only a matter of time before we find cell-based meat in our favourite restaurant or supermarket.

With so much controversy and inconsistency surrounding its label, the real question is, what are we going to call it?

Allen Zelden is the founder of Intrinity Global where he assists plant-based companies looking to scale-up and execute growth through increased sales, funds raised and access to global networks and manufacturing.